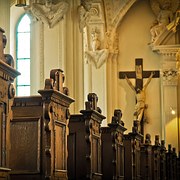 I distinctly remember the story of Abraham being called by God to take his son to the mountain to kill just to prove his allegiance to him.  And I thought, man, God is a dick.  What asshole wants his flock to follow all of his directions without question just to prove their faith?  But that story worked, because the people I grew up with never questioned the will of God, and what’s more, they never questioned the mouthpiece of God: the church elders.  I believe in God, but I refuse to believe in religion.  It is man who subverts religion for his own gain, not the greater good of God.  When a mortal tells a susceptible person this story and then asks them not to question them as well, the person is turned into a sheep.  They follow the direction of a mortal, not God, without question.

If you question the person, you question your own faith by their logic, so you simply go along as Abraham, hoping that God will show you the reasoning for his actions later, but it is not God who is directing you, but man.  It is man who uses this story to make you more docile to his wishes and to curb your questioning.  And what happened to these people I grew up with?  When faced with a threatening situation, they simply opt to pray because they so whole-heartedly believe in the power of prayer alone.  They don’t even seek out other avenues because they have been hard-wired to put all their faith in God.  And seriously, if God ever asked me to take my child to the mountain to kill, I may ask what for.  When we are conditioned to not question, we lose the ability to objectively see reality.  Whatever your beliefs are in God, do not place your trust blindly, especially in mere mortals who use the guise of God.