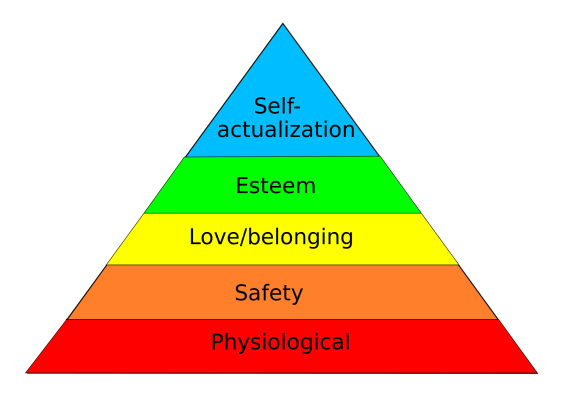 Esteem needs –‘All people in our society…have a need or desire for a stable, firmly based, (usually) high evaluation of themselves, for self-respect, or self-esteem, and for the esteem of others.  By firmly based self-esteem, we mean that which is soundly based upon real capacity, achievement and respect from others.  These needs may be classified into two subsidiary sets. These are, first, the desire for strength, for achievement, for adequacy, for confidence in the face of the world, and for independence and freedom.  Secondly, we have what we may call the desire for reputation or prestige…recognition, attention, importance or appreciation.’

I would further break down self-esteem into two categories, but my interpretation would first include how we feel and view ourselves and the other as the desire for the recognition of our strengths.  However, the first is NOT a motivation.  We are motivated to want prestige, fame, and acknowledgement, but self-esteem has never been a motivation for people.  People do not consciously know that they want to see themselves in a positive light, nor do they actively try to achieve this goal.  As children, we may or may not be encouraged to develop a sense of who we are, but many people vary in the degree of seeing how important self-esteem is.

First off, what is self-esteem?  How is it different from self-respect?  Is there a difference?  Yes.  Some people respect themselves highly and know they would never let someone else disparage them, but if they have low self-esteem, they may still believe it.  The two can exist independent of each other, however, those who have high self-esteem usually respect themselves as well and will usually also have high self-respect, but those who have low self-esteem can still respect their selves outside of who they are, which is also correlates to high self-respect. Whereas self-respect plays to how a person is treated by others, self-esteem plays to how a person treats themselves based on how they feel about themselves.  This is why it may be confusing at times when you confuse the two and mistake them for one another.

Some children are encouraged to enjoy who they are and they flourish.  Some may be discouraged, but more often than not, the majority are ambivalent, not because parents do not care, but because they don’t know how to encourage a reticent child.  As such, this insular world becomes even more insular as they internalize feelings and don’t understand the importance of self-esteem.  Because it is not a motivation, they do not build who they are.  They are still motivated to seek friends and love interests, but if they are not fulfilled internally by themselves, their relationships can be rocky because of this.  Many times, we are searching for a sense of ourselves throughout our journey and take on relationships we can’t comprehend in the search for what we want.  If we are not sure in who we are, we will be as equally unsure in who we want as a partner, causing rifts.

Some who are socially-withdrawn feel no need to develop their self-esteem.  They may regard themselves highly, but do not feel the need to elevate how they feel about themselves, thus they do not feel satisfied in this area and will not pursue other relationships or achievements because they feel as if they are not good enough.  They come up with reasons for this such as they despise human connections and they feel they are wasting their time and energy on useless things.  In actuality, humans crave relationships because they will undoubtedly feel lonely at some point despite their refusals.  Having self-esteem encourages these individuals to reach out to others because they feel they deserve relationships.

Why is it important?  It’s important because it serves as the basis of who we are.  When we have incredibly low self-esteem, we tend to accept less and feel fearful of other’s motivations and change in itself.  We are unsure of what the future will bring.  When we have high self-esteem, we welcome change and become more adaptable.  We have a more positive outlook on life and what comes our way.  Most importantly, we care about ourselves and are more in tune with who we are and what we want if we are honest with ourselves.  Ultimately, high self-esteem allows us to be the truest form of who we are and having pride in ourselves internally.

An example would be if a young adult asks someone out and gets rejected.  This is not a poor decision, but it retains a negative worth to them.  As such, they may let this memory eschew them and steer other decisions in their live.  We can tell them that at least they were brave enough to ask.  Some people go their whole lives without knowing a simple question, and they did ask.  The answer was no, but that doesn’t mean it doesn’t have meaning.  It means they were brave.  It means they have the ability to interact with others.  It means they have learned something.  When they don’t look upon the decision as shameful and fearful, they will see the pride of it and see pride in themselves.  This allows for them to see their decisions as positive memories that have enabled them to grow.

Maslow’s heirachy did not state that this was a strict hierarchy where each lower need had to be met before moving on to the next, but it was predicated on the belief that people are motivated to want self-esteem.  If people were motivated on this belief and chose to fulfill this need, they would definitely be able move on, but it is not a motivation.  Thus, some people who did not already possess high self-esteem would not be able to reach self-actualization.  The need for recognition and meaningful relationships would still exist, but these needs would not be fully realized if the person could not realize their own self worth.  What this results in is people searching for love, but either treat themselves or their partner badly because they feel they are not worthy.  Or they fail to advance at work because they fear change and authority.

How do we cultivate self-esteem?  Is it enough to just encourage children and tell them they are good?  No, because a parent can do this and a child can still have low self-esteem, which can be quite maddening for the parent.  The trick is teach them how to view their decisions and discuss them.  If it is a good decision, praise them for it and discuss how it affects those around them.  This allows for them to see how their actions affect not only them but those around them.  If they made a poor decision, we should talk about what went wrong, why it went wrong and how they felt about it.  Let them know the positives of a poor decision.  They at least have learned something from it.  They are wiser and richer for knowing it now.  The poor decisions are where we can cultivate the most self-esteem, which sounds counter-intuitive, but is not.  When we reinforce that poor decisions are part of the learning process, they see failure as necessary and not shameful.  When the shame is removed, they are able to see the nugget of good in the poor decision and learn from it.