Help! My girlfriend is crazy!

At some point or other, you have called a girl crazy.  But girls never call guys crazy, just ‘psycho’ or ‘serial killer.’  That’s a joke.  Hey, I like guys because clearly I’m with one, but the word crazy is something only used to describe women as emotionally unbalanced and hormonally-prone violent.  Now, I can admit there have been a time or two that I would throat-punch you if you said something wrong, but for the most part, being called crazy is just a tactic used by men to make women submit because they are being painted as unstable.  Here’s the secret:  sometimes, women just like men are irrational, but sometimes they’re not and they still get called crazy.

So I created this nifty flow chart to show how crazy works for dudes.  Helpful?  You’re damn right.  Guys, I get it.  You have to deal with women who may rape you on dates or possibly kill you if you leave them, so there’s a lot of crazy out there.  Oh, wait, that’s what women have to deal with?  And WE’RE the crazy ones?  I digress, but here’s how the chart works.  If you don’t like a woman, you can automatically categorize her as crazy because hey, you can give a flying shenanigan about her.  If you did care about her, you may still call her crazy, but is it because you know she’s on to something and just want to label her as crazy to throw her off?  That’s happened to me.  I thought an ex of mine was cheating on me and he said I was crazy.  Was he cheating on me?  You better believe he was. 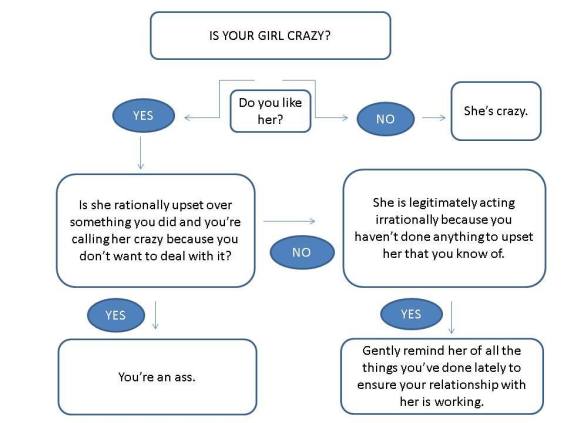 And then other times, she is irrational and it is not because you’re sidestepping an issue.  This legit can happen.  Let’s say you’ve had a normal day and all of a sudden she thinks you don’t care about her and you’ve done nothing to show her this.  This does happen from time to time and I want to explain this phenomenon.  Women tend to overthink things and they sometimes read too much into small gestures and they start to conjecture that their mate is somehow losing interest in them because they may feel insecure about themselves.  (This is why they would make great detectives.) It could not even be about the relationship, but something they are dealing with internally.  If this is the case, calmly sit her down and remind her of all the things you’ve done lately and assure her you’re in it for the long haul.

Why then are women being called crazy?  If a chick is crazy, you would not be involved with her.  If you did truly care for her, you would try to make her understand, but if you just want to avoid a situation, you may employ these tactics.  Of course not all guys do this, but it is something that occurs frequently enough that crazy is an adjective reserved only for women. And I get it, sometimes, a chick will key your car, but the chick that is with you who cares about you shouldn’t be labeled that.  All I know is that I have yet to throat-punch my boyfriend, but that’s because people think he’s a serial killer.  Edit: He is not a serial killer but a thoughtful boyfriend who enjoys my jokes.