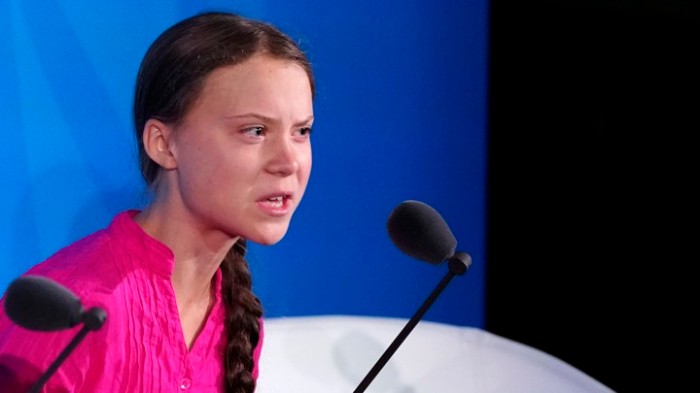 Greta Thunberg gave an impassioned speech at the U.N.’s Climate Action Summit in New York City and the animosity has been swift and fast for this 16-year-old from Sweden.  A guest on a Fox news program The Story with Martha MacCallum called her ‘disgraceful’ and a ‘mentally ill Swedish child’ because she has Asperger’s syndrome.  Laura Ingraham continued the hatred by equating her to murderous, zombie-like children from Stephen King’s Children of the Corn.  Most unsettling is how regular citizens speak about her and discredit her desire to protect the environment.  When David Hogg spoke out against gun violence, the very same people said the most vile things about this high school kid by threatening him and calling him all sorts of names.  At least with David Hogg, I could understand why because these people perceived that he was ‘taking away their guns,’ but what exactly is Greta Thunberg taking away from them that they feel they must undermine her?

People have chosen to discredit her with her age, her Asperger’s condition, her nationality, and more.  I’ve noticed that anytime high-school or middle-school children protest, people question if these children really grasp the concept of what they’re doing and say that they are simply doing it for fun.  When athletes protest police brutality, they ask why they are being paid so much money.  When women speak out about sexual violence, their authenticity is questioned.  Let’s look at the inverse?  Are old people ever wrong?  Does anyone ever question why the owners of athletic teams make so much money?  Are men held to the same standards as women in regards to their believability?  The truth is, we use easy arguments against those we don’t agree with because it’s easier to attack these things than the real argument at hand.  If we can discredit a part of who they are, then we can discredit their ideas as well.

What exactly is it about Greta Thunberg that makes so many want to discredit her?  She is not trying to take anything away from anyone, but what she is showing is power and when someone gains power that we don’t feel they should have, we go after them to make ourselves feel better.  As such, we must ask who has the most power?  It is the latter examples in the last paragraph: older people, the owners, and men.  However, we have already ascribed power to these people, so when they make a show of it, we don’t bat an eye, but when those we perceive as lower than us do it, we immediately try to take them down because they threaten who we are.  They threaten our status quo and what we believe the power dynamic should be.  When our perceptions are threatened, we are scared and as such, lash out at children that are innocent of any crime.  Power is a tricky thing, but even more tricky is our perception of it.