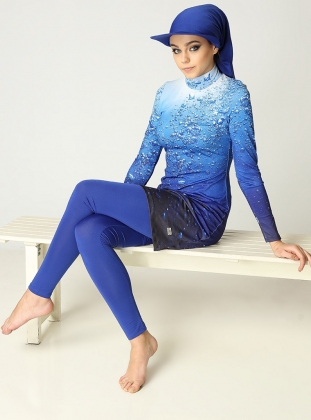 The burkini has been in the news lately and if you don’t know what that is, it’s a garment meant to cover a woman’s entire body when she is at the beach at the behest of her religion.  That lovely name joins burqa and bikini into a catch phrase that the media loves to flaunt.  Lately, beaches around France has made headlines about banning the article of clothing because it infringes on people’s rights.  I hate the idea of the garment because it bends to religion.  It uses religion to dictate what a woman should show in public, and that is something I can’t agree with.  However, I agree that those who choose to wear it have that choice.  I may not agree with everything you do, but you have that option. That is what religious freedom means.  I also don’t agree with what Utah Mormon women are forced to wear, but that’s their choice.  To blame the individual religion is nonsense, for any religion that denounces what women wear should all be treated the same.

And on the non-religious side, a school teacher named Paris Monroe has been reprimanded by social media for her clothing choices.  She is a very curvaceous woman who enjoys dressing up, and some people find it inappropriate that she dresses herself in that way in front of children.  I myself have been on the receiving end of glares from women and men when I wore things that a person who didn’t have curves would have no issues with.  I have gone through that and sympathized with her, but I also thought one of her clothing choices was somewhat inappropriate.  Despite what I felt, I also know my feelings still had no bearing on this woman’s right to choose what she wanted to wear on a daily basis.  As humans, we’re going to always judge, but that doesn’t mean the other party has to heed what we believe.  I can judge all I want, but I will also defend these women’s rights to dress their own body.  When it comes down to it, the freedom to choose is more important than the pressure to conform.